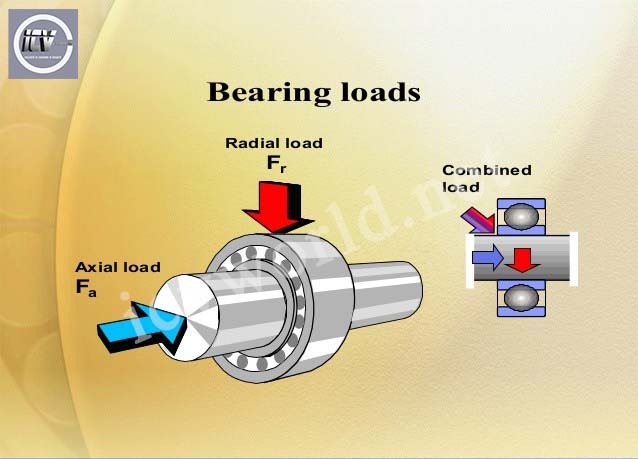 Bearings (Bearings) have many types of loads used to calculate the life as well as consider to prevent damage occurring. Let’s ICV World learn about each type of loads.

Mobile load capacity is a type of load that is durable of all sizes against the load surface of Bearings. 90% of a bearing will function for a predetermined cycle without wear and tear. Typically, mobile payload capacity can be based on a lifespan cycle of about 50km or 100km. It is very important to pay attention to the maximum usable distance of Bearings.

Static load capacity is defined as the type of load or motion where deformation occurs prematurely on ball and railway, equivalent to 0.0001 times of ball’s diameter. This deformation can be caused by load or impact. The deformation of a Bearing’s surface affects its operation and service life.

The recommended safe static load level depends on the type of application, or the degree of vibration or impact:

Inside: S0 is the safe level of the static load

C0 is the static load capacity

F0max is the maximum load

It is very rare that a single load is generated in one direction for the entire operating distance. When different types of loads are encountered, or multiple loads at the same time, the bearing life calculation is based on the equivalent load. Equivalent load is a single value, giving an expected life equivalent to real life from all combined conditions. Briefly, all loads and time are converted to perpendicular load.

Static equivalent load considers all static loads from all directions, as well as static movements. Since the mobile load is applied, the equivalent mobile load takes into account not only the various loads, but also the time and distance of each type.

Some bearings maintain the same load ratios, regardless of the direction of the load (bottom up, top down or around), while others have the same rate the load from top to bottom rather than from bottom to top.

Bearings are inherently used to reduce friction in machinery, minimizing sliding friction from the system by using rolling friction instead with a much lower coefficient of friction. However, while a bearing attempts to reduce the total friction in the system, the inside rolling elements themselves still require a certain amount of friction to roll rather than to slide. This internal friction is created by applying the minimum load to Bearings. This type of load can either be generated internally with a preset load, or by an axial load.

Without minimum load, the life of Bearings will be severely affected. Slippage between the rolling elements and the railways can damage lubrication, make Bearings more susceptible to contamination. These stains not only damage the rolling surface, but also cause over-heating.